The numerous found remains of “castrexa” culture villages, Roman elements and the great necropolis of the area of A Lanzada confirm the existence of human population in Sanxenxo 4.000 years b.C. The promontories of the coast served as natural strengths for the existing population. Among them stands out Lanzada, which until the Middle Ages was one of the main enclaves to defend against the invasions of Normans and Saracens.

Salt had an important place in the history of Sanxenxo. In Noalla, the Phoenicians found the natural conditions to create the large deposits where they salted the fish that they then transported anywhere in the Mediterranean. The importance of these salt mines goes back to the 18th century and explains the high rate of population that this area had in the past The first contacts of the indigenous population with the Romans correspond to the expedition of Publio Crassus in the 2nd century b.C. Later, it was Julio César himself who explored the Galician rías and established a relationship with the indigenous "castrexos"

Between the 5th and 10th centuries, Sanxenxo suffered constant attacks and looting of Vandals, Normans and Muslims. In 952, Bishop Sisnando II ordered the construction of the fortress of A Lanzada, which was part of the maritime defense of Santiago de Compostela together with the towers of Catoira and Cambados.

During the 11th and 12th centuries, the Saracens sacked the coast causing severe damage to the maritime trade. Until the compostelano bishop Diego Gelmírez orders the construction of galleys manned by two hundreds of men who manage to throw out the Saracen ships. At the end of the 15th century, in the midst of the struggles between the high nobility on the one hand and the clergy and the common people on the other the fortress of A Lanzada, known as the struggle of the Irmandiños, is destroyed.

During the 15th, 16th and 17th centuries, fishing and agriculture became the main economic activities. Sanxenxo goes from feudal wars to economic confrontations for fishing rights and its various arts. Disputes arise between Pontevedra and Combarro dummies on the one hand, and on the other hand Sanxenxo and Portonovo dummies.

The disaster of the Invincible Navy returns to leave the Galician coasts at the mercy of pirates like the English Francis Drake who, at the end of the 16th century, plunders many towns. Later, it is the Turkish pirates who interrupt the trade with the Spanish Levante.

In the 18th century, the jurisdiction of A Lanzada has a high population density: 67 inhabitants per km2 compared to 15 on average in the rest of Spain. Fishing and agriculture are still the main economic activities. The Franco-Spanish alliance will have serious consequences for the coast of Galicia, which until the signing of peace with England in 1778 was subject to constant attacks by English ships.

In the 19th century, the salting industry, introduced by the Catalans in the mid 18th century, is modernized to compete in national trade. This industry is harmed by the tithe demanded by the “Mitra Compostelana”. Fortunately for the Galician economy, the rebellion against the payment of this tax did not take long to arrive. In 1835 the city council of Sanxenxo is constituted that includes, in addition to the current term, the one of municipalities like Meaño and O Grove.

In the early twentieth century, Sanxenxo begins to stand out for its natural qualities, becoming a summer resort for politicians and other socially important characters, becoming one of the main tourist destinations in Galicia. 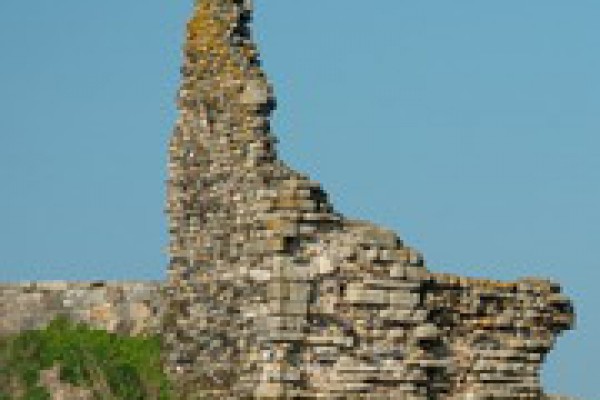 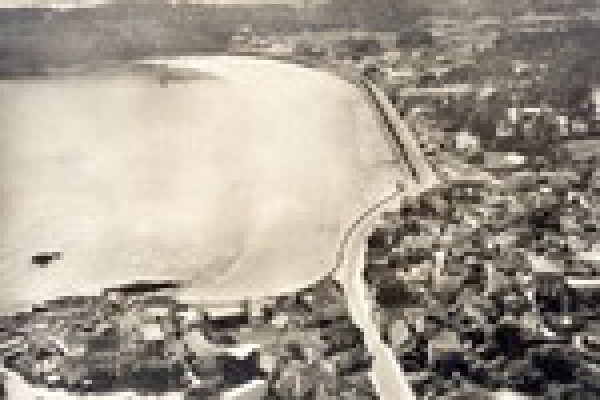 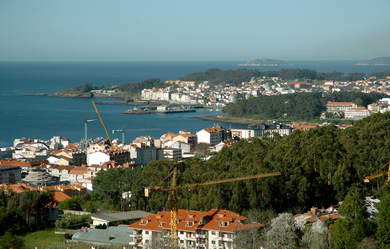 Xunta de Galicia on July 14, 2000 reported favourably the proposal for the rehabilitation of the heraldic shield and the creation of Sanxenxo City Council’s flag after the study carried out by the official D. Victoriano Andrés Otero Iglesias. 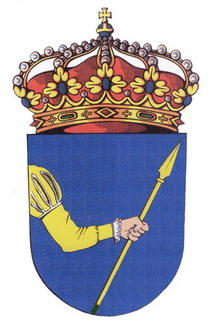 The flag of Sanxenxo is made up of nine yellow stripes and nine blue stripes. The nine yellow stripes represent the nine parishes that made up the municipality, the current 7 and Arra and Gondar. While the nine blue stripes symbolize the nine waves of the legend and the rite of fertility of the sea of La Lanzada. At the same time it also supposes a tribute to the sea that bathes the municipal coast. It also incorporates the armored furniture to the flag with the same historical reference outlined for the shield. 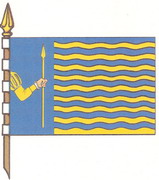 The City Council of Sanxenxo, by plenary agreement decided to implement a new image to achieve a more fluid and direct communication between the institution and the citizens.

The basic signs of visual identity of Sanxenxo Council become the symbol (simplification of Sanxenxo's historic shield), the different logos (denomination of the institution), the color of these signs and the specific typography with which the texts of the various communication supports